My Uncle George was the fountainhead for much of my instruction in the “Facts of Life”.

George kept Playboys in his basement in a big wooden crate. Once the cousins found the crate the Stork was history.

George explained the “Wine Facts of Life” to me when we started making wine.

Uncle George had desecrated his suburban front lawn and covered it with horse poop and planted blueberries. It turned out that blueberries love horse poop. George discovered that if we made wine from the blueberries then he would be a Vintner and we were off and running. George began to speak of his vineyard and vintages and fellow vintners.

That blueberries grew on bushes and not vines was an alternative fact.

George was overjoyed when I asked how wine was made. He loved stuff that was iconoclastic. He showed me some grains of yeast and explained, “It’s called fermentation. These little yeasties drink the sugar in blueberry juice and pee alcohol until they pass out in the alcohol. They also pass gas.”

It sounded a lot like one of our Irish birthday parties.

It occurred to George as we were bottling the wine that if he added a little extra yeast and sugar he might get more alcohol. This started what is known as second fermentation.

The myth of real champagne’s creation is as odd as my Uncle George story.

The credit is accorded to a couple of monks – Dom Perignon, a big tall guy, and Dom Ruinart, his little helper. Dom Perignon was a cellar master in a monastery in Champagne, a province of France. He probably stumbled upon making champagne by putting wine in a container that had leftover sugar in it. After the good father mastered the basics of bubbles he tried to keep it a secret, but his little helper took off down the road to the next monastery and started making his own champagne.

The bubbles were on the loose.

The champagne the boys made had stuff floating around in it and looked more like cloudy beer than bright and sparkling champagne. It took a woman to make champagne beautiful – surprise. The neighborhood widow, Mrs Clicquot – in French the veuve Clicquot – radically improved the look of champagne by inventing the riddling rack.

A riddling rack is big board with holes in it. You stick the bottle of champagne sideways in one of the holes. All the junk slides down to the bottom side of the bottle. The bottles are turned and increasingly inverted until the bottle is upside down and the junk is in the neck. Then the neck is frozen, the frozen junk is removed – degorged – and the bottle is recorked and wired shut again.

The widow’s portrait is still on the famous orange label of Veuve Clicquot. She is kind of scary looking. She spent a lot of time in the basement.

When George invented blueberry champagne he left out the wiring-the-cork-shut part.

The bottles did not blow all at once. It was spread out over a few days. Most of them blew in basements and sheds so it wasn’t too bad. One unfortunate bottle exploded in Aunt Mary’s dining room. Mary was the sister who almost became a Sister. She damn near killed Uncle George.

If you are inclined to see a real riddling rack, I bought a couple and used them to make sliding doors at the Doctor’s Office, our new little craft bar.

Sean Murphy is the Head Coach of the incredibly talented team that runs the Beach Bistro, it’s little sister Eat Here, and their new craft cocktail bar, The Doctors Office. Some of his articles can be found on the Bistro’s web-site, www.beachbistro.com 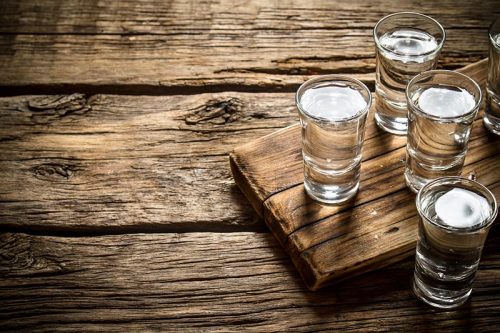