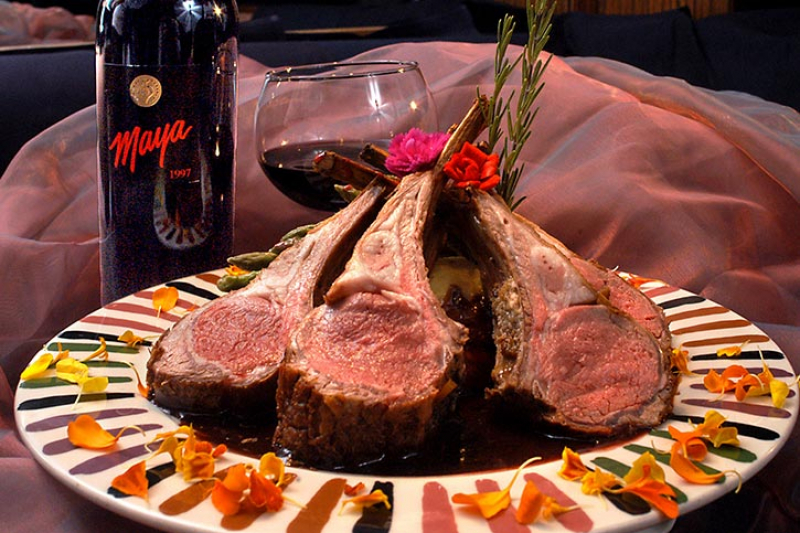 Rack of Lamb from the Beach Bistro

Summertime and the living is easy…and hotter.

Shorts are dress-up wear – and maybe the only appropriate wear – in Florida in Summer.

So I thought it would be nice to try some on….shorts that is…from the Beach Bistro’s 32 years.

Annette has been with the Bistro family since its inception. Years ago a patron enquired of Annette…”What is the difference between the Scampis and the Scallops…?”

JP was presiding over the Dining room and had just served a beautifully prepared and presented Rack of Domestic Lamb….the best lamb in the world.

“I wonder what the poor people are doing tonight…?

“We are waiting on you sir.”

He was very caring and attentive to two elderly lady patrons.

They became sufficiently enamoured of him to ask …”You are such a good waiter young man. Is it your ambition to own your own restaurant some day?”

“No M’am. It is my ambition to stop working in this one.”

On Steve’s last night, while opening the last bottle of wine he would open as a waiter, his corkscrew of twenty years broke off at the screw.

Just like that Steve was a retired warrior with a broken sword.

A young man with his ambition accomplished.

My favorite bartender in the whole world…?

I know some incredible bartenders. Fred and Brianna at Beach Bistro and Chris and Kahle at the Doctors Office but one day in Philly my favorite was working at the Black Bass.

I was early for a reservation at a pretentious place down the street. To kill time I sat at the bar and ordered some oysters and a glass of Sancerre.

The bartender opened with… “Where are you from….?”

Almost all bartenders open with. “Where are you from.”

Gets patrons talking about themselves and asks a question they know the answer to.

“I am from Anna Maria Island.”… I said

“My favorite restaurant in the whole world is on Anna Maria Island.”

All my senses tuned to high alert.

“And what restaurant would that be…?” I asked.

“A little place called the Beach Bistro.” he said.

“Well,” I said. “You just became my favorite bartender in the whole world.”

Last week I got a new favorite travel writer. Jan Tuckwood was writing for the Palm Beach Post, one of the Florida’s top newspapers.

Jan wrote that her favorite restaurant was the Beach Bistro, and that it was “the best restaurant in the state.”

She also loved the island’s new bar – the Doctors Office.

Of The Doctors Office she wrote that it was “the cure for your old dull self”.

Sounds like a good way to start a hot summer.