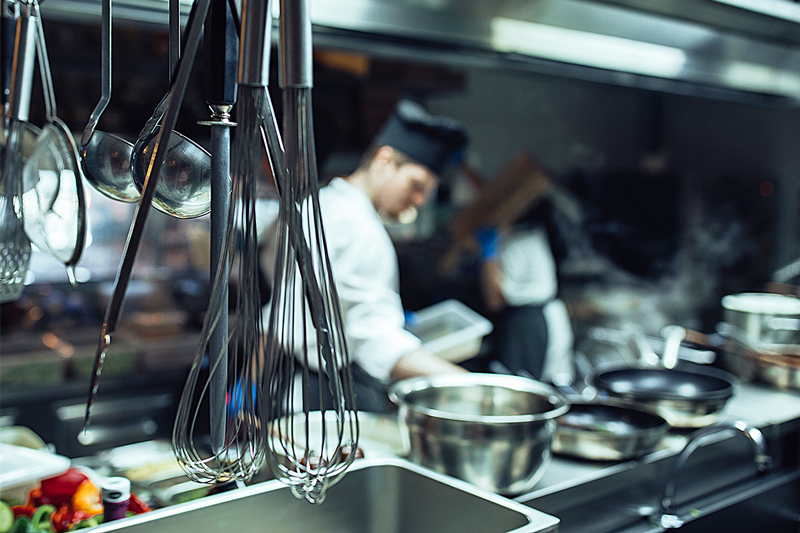 Table Four and the Big Fold-up

For decades the amazing Bistro food professionals have been exceeding patrons’ expectations, night after night.

Sometimes the Bistro professionals have to be patient with “Chef” amateurs.
Chef amateurs have an aggravating tendency to try to impress, or even best, the professionals on our team.
Amateurs trying to impress.
One Bistro evening years ago a couple of belligerent amateurs on Table Four created a scene.

They had ordered Port-Braised Prime Beef Short Ribs. Our short ribs are amazing.
The uncooked rib is massive, with a thick layer of beef embedded in flavorful ribbons of fat. The rib is braised in port with shallots and herbs until all of the flavor leaves the fat and the bone and is absorbed by what becomes a lush, fork-tender cut of beef.
We remove the fat and bone and serve the rib meat in a rich reduction of the braising juices crowned with a foie gras mousse over triple-cream mashed potatoes.
It might be the best thing you have ever tasted.

The Chef Amateur couple had been drinking. They were pompous and belligerent and finally foul-mouthed. They had exhausted the patience of the wait staff.

The team called the coach off the bench.
I approached the table.

I rarely introduce myself as the owner.
It is best to keep that gun in your pocket.

Arrogant amateur chef guy, “My wife takes chef classes and she knows food and this is not a rib.”
Amateur chef lady had not yet touched the plate. They had no idea how great it tasted.
Amateur lady said, “What is this, a McRib? Is this from McDonald’s? There is no bone. This is not a rib. This is a McRib. I know food. I cook at home.”

McRib.
She was comparing a Bistro creation to a McDonald’s product.
My mind flooded with images from Hieronymus Bosch — souls burning in hell.

I practiced deep breathing and retired to the kitchen to find my better self.
Be nice. Be patient. Be charming.
I brought a massive uncooked short rib from the kitchen.

“Ma’am this is what it looks like before it is cooked. The big boney part is the rib. It is removed after cooking.”
By now she was devouring the succulent dish and was in foodie nirvana, foie gras mousse dripping from her chin.
The husband started again, “We are chefs. We cook at home. We know food.”

I started thinking about what I would like to do with the huge bone.

“Well your wife seems to be enjoying her dinner. I hope you have a lovely evening.”
I walked away.
Amateur chef guy called the waiter over.

“Waiter that guy is an asshole. I want to talk to the owner.”

Thereby handing the waiter the best line in the story.

“Sir, that asshole is the owner.”

The guy could not stop. He got louder and fouler. I came back to the table.
He started, “So you’re the owner. I heard about you. You’re from Nova Scotia.
Nova Scotians are just ignorant fishermen. That explains everything.”

The amateur Chef guy had just poked a stick in the eye of the Irish kid from Nova Scotia.

I wanted to do the “Big Fold-up.”
The Big Fold-up is the penultimate way to kick someone out of a restaurant.
You grab the four corners of the tablecloth and fold it up and over glasses, plates, food and everything and just walk away with it.
There is some breakage but it can be incredibly satisfying.

I thought of Adam Ellis.
Adam starting working with us when he was fifteen.
He worked with us for years before opening the Blue Marlin down on Bridge Street.
A long time ago I promised Adam I would never do the Big Fold-up without him.
Promised him.
The Blue Marlin is a great restaurant. I knew they were busy that night.
If I called Adam it would take him at least thirty minutes to get to the Bistro.
Too long.
If I did it without him he would never forgive me.
So, sadly, no Big Fold-up.
But these folks had to go.

I removed the wine and the glasses from the table.
Then I took the plates.
The guy tried to hang on to his plate. I wrestled it away.

I said, “Great news. You don’t have to pay. But you are leaving. Now.”
“This ignorant Nova Scotian fisherman prefers you dine elsewhere this evening.”

Hubby sticks his chin out and stands, threatening, with fists clenched, facing off.
Then he realized that behind the ignorant Nova Scotian fisherman were three large chefs. “McRib” inspired.
He muttered obscenities during an ignominious retreat.

The room stood and applauded. I curtsied and ordered champagne for everyone.

Adam was disappointed I didn’t call.
He said he could have made it in fifteen minutes.

Inspiring… the big fold-up as enacted by Bradley Cooper in the movie Burnt. Click on the scene to watch the clip.
For historical accuracy… I first heard of the Big Fold-up so long ago I thought I invented it.

Sean Murphy is the Head Coach — recently “somewhat retired” — of the incredibly talented team that ran the Beach Bistro and now runs The Doctor’s Office.