Dr Huth, one of our original island Doctors, enjoying a smoke break outside “The Doctor’s Office, Circa 1950”

Since the fifties the space occupied by this bar was the Island Doctors’ office. It was the office and surgery for Doctor Huth and then Doctor Deame and then finally Doctor Stephen Pelham. Generations of Islanders received medication, advice, stitches and acts of kindness and good will.

Sean Murphy and Susan Timmins are the proprietors of this bar and Beach Bistro and Eat Here.

Sean was born and grew up in Halifax, Nova Scotia. He was the president of the student council at St Patrick’s High School – the “Head Boy” of Halifax’s largest Catholic High School.

There was a family of Catholic boys that attended St Patrick’s – the Pelham brothers. Two of the Pelhams were much celebrated at the time – Cliffie and Ricky.

They were big and strong and fast of fist and boot and when there were a gang of Protestants in the room resolved to settle the Irish question in a forceful way one hoped that Cliffy and Ricky Pelham would show up.

They rescued a boatload of Catholics and saved Sean’s scrawny neck more than once.

There was also a younger brother – Stevie. He was a hell of a hockey player and was a freshman when Sean was a senior.

Years later Sean travelled to Anna Maria in an Austin Marina. The car was the sad bastard of British and American auto technology. It represented the worst of both.

Sean’s Austin Marina leaked almost everything, continuously. He spent a good deal of his time under that car being bathed in mechanical fluids – brake fluid, transmission fluid, oil, gasoline.

This eventually earned him a rash.

Susan insisted he visit a doctor.

Sean was sitting on an examination table in this “doctors’ office” when a kid walked in wearing a clinicians’ white coat and carrying a clipboard. He looked to be about fifteen. His name tag said “Doctor Pelham”.

The doctor looked up from his clipboard and asked…

“Are you Sean Murphy that used to be Head Boy at St Pat’s High School?”

It was natural that two men of shared culture and background thousands of miles from home should become friends…but Steve became a very special friend.

A few years later Sean and his wife Susan were in the desperate throws of opening the Beach Bistro in the teeth of a hurricane. Wind and waves were pounding the windows and water was invading the premises. Steve Pelham and his wife Shelagh spent a long night shoveling sand and heaving sand bags and bailing to keep the infant Bistro afloat.

Steve and Shelagh were also there in support for the birth of Susan and Sean’s first child.

Steve has stitched and bandaged Sean and his chefs in this room and the Bistro kitchens.

Steve and Shelagh have always been there when needed.

Their friendship has been a source of joy and love and laughter since that first meeting in this room over thirty five years ago.

We hope that the good will and good health generated in this building will act as a fountainhead for other great friendships and that friends will come here to celebrate kindness and good cheer.

Dr Steve is still in the business of diagnosis, prescription and dispensing sage clinical advice.

His wise advisory to Sean in the clinic at that first meeting for treatment of his rash…?

“You better sell that goddam car.” 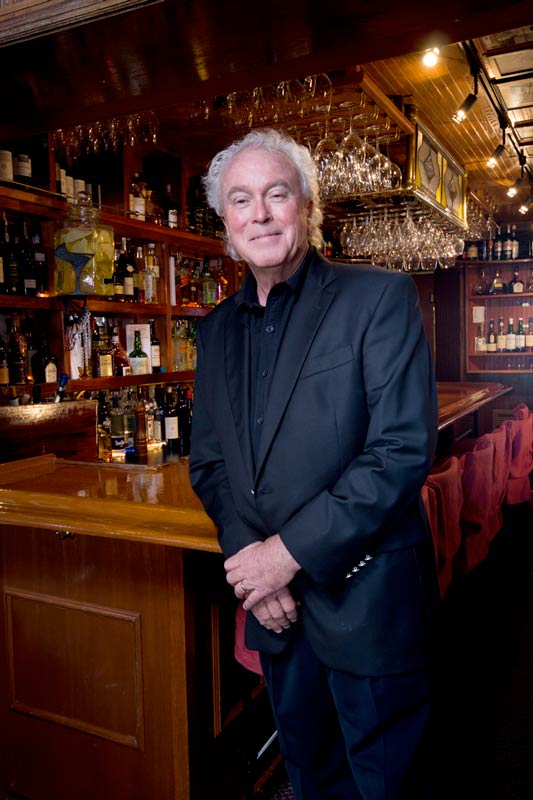 A native of Halifax, Nova Scotia, Sean graduated from Dalhousie Law School, the “Harvard of the North.” Avoiding a career in law and Canadian winters, he followed his passion for food to New Orleans and learned the restaurant trade under the tutelage of industry renowned Archie Casbarian at the world-famous Arnaud’s. There, he was introduced to Dr. Murf Klauber of the Colony Beach and Tennis Resort, where he worked before opening the Beach Bistro.

Sean has spread his passion for great food and service to include food writing and consulting. Sean Murphy and Beach Bistro Hospitality Consulting has provided services for a variety of great food endeavors. Evolving from one of those endeavors came the eat here Anna Maria Island cookery in 2010.

Sean attributes the success of his restaurant group to the strength of his team. “We have the strongest group of managers and chefs anywhere. They understand that our craft requires two major commitments: What we do must be done perfectly and we must be relentless in the pursuit of that perfection.”